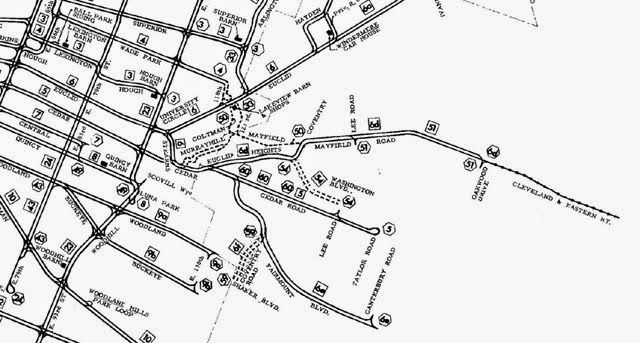 Cleveland's regional transit authority maintains only rail-based public transportation in Ohio. The 37-mile system comprises a mixture of traditional light rail and a unique heavy rail transit system which uses an overhead catenary instead of a third rail.

The system, while fairly robust for a city of its size, is merely a shadow of what it used to be nearly 100 years ago. Below thick layers of asphalt, lying dormant, are the bricks and rails that stitched together this incredibly efficient people-moving system. In several parts of the city, a streetcar stop was never more than a quarter-mile away (today, in Shaker Heights, it's still a half mile). Single-track interurban lines would run as far as Chagrin Falls, Chardon, and beyond. The map on the upper left encompasses seven miles centering on University Circle around 1925, just as Cleveland Heights, on the eastern half of the map, was under construction.

Recently some of the history of the local streetcar system has popped up in my news feed.

Cleveland Scene posted some historic photos of the streetcar system today. Check them out by following the link here.

Cleveland Public Library has posted an avant-garde film, filmed in the summer of 1953, of the last runs of the streetcar system. Watch as the delicatessens roll by, ticket-takers exchange niceties with the passengers, and as an added bonus, the streetcar arrives at the underground Detroit-West 25th station. Link here for first part, link here for second part.