Cleveland is 10th safest city for pedestrian travel in the country

According to this article in CityLab, Cleveland is the 10th safest city for pedestrians walking on streets.

The authors of the study, called "Dangerous by Design 2014," assigned a "Pedestrian Death Index" number to each of the 51 largest metropolitan areas in the country (probably because one of the authors is from Rochester). The cryptic methodology behind the Pedestrian Death Index involves dividing the number of per-capita pedestrian deaths by the percentage of people who walk to work.

Worth noting in this study is that Greater Cleveland has the lowest number of pedestrian deaths per capita for all except one of the metro areas in the study (Minneapolis-St. Paul MSA). The only reason Cleveland gets bumped down to #10 is its relatively low number of pedestrian commuters--2.2% vs. 2.3%--an awfully trivial difference.

This study doesn't consider the number of pedestrians who take public transportation to work, who inevitably must walk on the streets and ought to be considered in the population. Here's a sample of the census data:

There's not much advantage to the Greater Cleveland statistics by using this method, as more people in, say, Pittsburgh, use the bus to get to work (probably because driving anywhere in that city is a hair-pulling nightmare). All things considered, the last-mile problem with public transportation necessitates a good deal of walking for all but a small percentage of the bus/train commuting population and ought to be considered in the number.
Posted by CCarson at Wednesday, May 21, 2014 No comments:

It's Official: Playhouse Square's giant chandelier is the largest in the world

If you've taken some time to come up for air from reading the boneheaded negativity that is the cleveland.com comment section, you might have noticed that something positive came about because of the PlayhouseSquare chandelier project.

As a part of its placemaking project, PlayhouseSquare announced that it would be installing a giant outdoor chandelier over the intersection of East 14th Street and Euclid Avenue back in April of last year. Dubbed "Dazzle the District," the $16 million project, which included gateway signage, digital displays and other cameo lighting installations, it intended to pull the grandeur of the theatres into the street and create a destination worthy of a major city.

Last week, the Guinness World Records people confirmed that the cameo chandelier installation was in fact the largest in the world. Congratulations for PlayhouseSquare for finally getting something accomplished in Cleveland that is truly unique.

"Now we begin," said PlayhouseSquare's senior vice president of theater operations, Gina Vernaci. "This defines Playhouse Square as a destination, which makes us unlike any performing arts center in the United States."


I attended the lighting ceremony last week. Bands and dance troupes performed for the crowd on the stage set up in the middle of Euclid Avenue, and local dignitaries gave their two cents on the matter. Here's the last thirty-five seconds of the ceremony:

What is a Photocopier?

Back in 2010, the Cuyahoga County Recorder was sued for charging an exorbitant $2 per page for photocopies and overcharging for various other public records.

Cleveland Scene made note of the transcript of the deposition of a county employee, arguing over the definition of a photocopier. These kind of absurd exchanges are fairly common in depositions.

A talented writer and director took the verbatim legal transcript and dramatized it. What resulted was a fall-out-of-your-chair cornucopia of laughs.

By the way: The recorder's office still charges $2 per page (which isn't even unusual anymore, as the oil & gas areas in southern Ohio are known to charge $4/page!)
Posted by CCarson at Sunday, May 04, 2014 No comments:

Lakewood, Ohio: a suburb without a school bus system 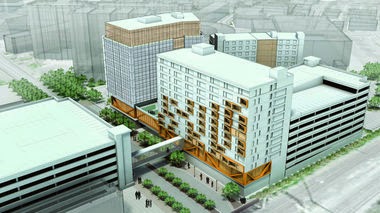 Yet another project in the heart of University Circle that was thought to be dead or on the back burner has been given new life through a recent press release by the developers.

This development is slated to replace one of the largest remaining surface parking lots in the heart of University Circle -- an area called the "Triangle" as it is bordered by Euclid Ave., Mayfield Rd., and the GCRTA's Red Line. In anticipation of this development, and in an all-around smart move, the GCRTA is relocating its disused East 120th rapid transit station to Mayfield Road, thus turning the Intesa project into a solid transit-oriented development project.

Here's the crib sheet on the project details:

This is just yet another project pushing forward on University Circle, Inc.'s grand master plan to eradicate the neighborhood of surface parking lots. This looks like it's going to happen, as that unsightly surface lot is one of the last remaining spaces of vacant land in this part of town, and it's crucial for connecting the fabric of the vibrant Little Italy neighborhood with the technology, arts, education and medical hub contained in University Circle.

Here is an article from 2012 detailing the project's debut.